Kubuntu 12.10 Released (Tarah does a dance and installs on four different boxes)

Kubuntu 12.10 Released (Tarah does a dance and installs on four different boxes) 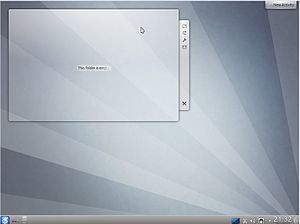 I am more excited than usual for the release of Quantal Quetzal.

Holy CRAP. Just got done installing 12.10 on my Lenovo Z570; this is the first time in years that I haven’t had to log back in and reflag the boot partition on every box. That is wonderful. I am in love.

Installation on an Acer Aspire One went swimmingly, as did an overlay of Edubuntu on top of 12.10 (for my nine-year old sister). There’s a whole new interface on netbooks; I wonder if Quantal detects a smaller screen size and goes with a more touch-based appearance?

Installed on my monster home server box, and again, not a single issue with having to reflag the boot partition.